Haptic means “of or relating to the sense of active touch, in particular relating to the perception and manipulation of objects using both cutaneous sensation and proprioception.”  From S. Tachi. "Telexistence 2nd Edition," World Scientific, 2015, p.204.

Humans do not perceive the world as it is. Different physical stimuli give rise to the same sensation in humans and are perceived as identical. A typical example of this fact is human color perception. Humans perceive the light of different spectra as having the same color if the light has the same proportion of the different spectral components. This is because the human retina typically contains three types of color receptors called cone cells or cones, each of which responds to a different range of the color spectrum. Humans respond to light stimuli via 3D sensations, which generally can be modeled as a mixture of the three primary colors (red, green, and blue).

In physical space, human skin physically contacts an object, and the interaction continues over time. Physical objects have several surface physical properties such as surface roughness, surface friction, thermal characteristics, and surface elasticity. We hypothesize that at each contact point of the skin, the cutaneous phenomena can be broken down into three components: force f(t), vibration v(t), and temperature e(t). Objects with the same f(t), v(t), and e(t) are perceived as the same, even if their physical properties are different. We measure f(t), v(t), and e(t) at each contact point with sensors that are mounted on the avatar robot's hand and transmit these pieces of information to the human user who controls the avatar robot as his surrogate. We reproduce these pieces of information at the user's hand via haptic displays of force, vibration, and temperature, so that the human user has the sensation that he is touching the object as he moves his hand controlling the avatar robot's hand. We can also synthesize virtual cutaneous sensation by displaying the computer­ synthesized f(t), v(t), and e(t) to the human users through the haptic display.

This breakdown into force, vibration, and temperature in physical space is based on the human restriction of sensation in physiological space. Much like the human retina, human skin has limited receptors. In physiological space, cutaneous perception is created through a combination of nerve signals from several types of tactile receptors located below the surface of the skin. If we consider each activated haptic receptor as a sensory base, we should be able to express any given pattern of cutaneous sensation through synthesis by using these bases.

Because all seven receptors are related only to force, vibration, and temperature applied on the skin surface, these three components in the physical space are enough to stimulate each of the seven receptors. Thus, in physical space, we have three haptic "primary colors”: force, vibration, and temperature. Theoretically, by combining these three components we can produce any type of cutaneous sensation without the need for any “real” touching of an object. 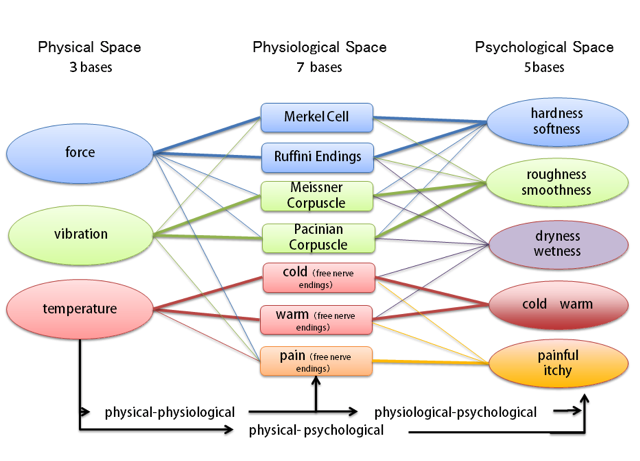 Different physical stimuli give rise to the same sensation in humans and are perceived as identical.

The aforementioned discussion can be summarized as follows: A target object has physical properties, such as the concavo-convex shape, surface texture, friction, thermal conductivity, viscosity, elasticity, inertia, and humidity. However, generally, human cutaneous receptors only sense force (skin deformation), vibration, and temperature change, which occur at the contact to the physical body when the person touches the target object. Therefore, the optimal sensors are the force, vibration, and temperature sensors that directly sense these quantities. These quantities are transmitted and presented to the person through the force display, vibration display, and temperature display. Figure 2 shows the diagram of the measurement system, transmission, and presentation based on the principle of haptic primary colors. 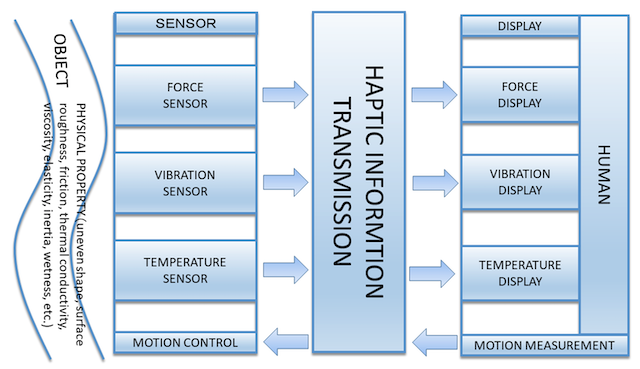