TELESAR II is a mutual telexistence system, which can generate the effect of existing in a remote place in local space by the combined use of an alter-ego robot and RPT. A person in front of the robot sees the full face of the operator, while another person seeing the robot from its side sees the facial profile of the operator in real time.

The ideal systems should be mutual telexistence systems, which provide both the sense of self-presence and their presence, i.e., the user should get a feeling of being present in the remote environment where his or her surrogate robot exists, and at the same time, the user who remotely visited the surrogate robot’s location could be seen naturally and simultaneously by several people standing around the surrogate robot, as if he actually exists there. However, almost none of the previous systems could provide both the sense of self-presence and the sense of their presence.

Figure 1 shows the conceptual sketch of an ideal mutual telexistence system using a telexistence cockpit such as TWISTER and an avatar robot. User A can observe remote environment [B] using an omnistereo camera mounted on surrogate robot A. This provides user A with a panoramic stereo view of the remote environment displayed inside the cockpit. User A controls robot A' using the telexistence master-slave control method. Cameras B' and C' mounted on the booth are controlled by the position and orientation of users B and C, respectively, relative to robot A'. Users B and C can observe different images of user A projected on robot A' by wearing their own head mounted projectors (HMP) to provide the correct perspective. Since robot A' is covered with retroreflective material, it is possible to project images from both cameras B' and C' onto the same robot while having both images viewed separately by users B and C. 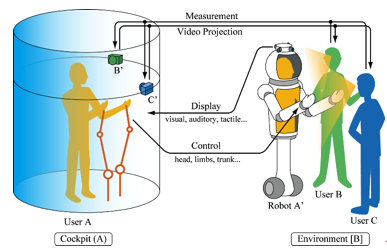 A method for mutual telexistence based on the projection of real-time images of the operator onto a surrogate robot using the RPT was first proposed in 1999 [1], together with several potential applications such as transparent cockpits [2], and the feasibility of the concept was demonstrated by the construction of experimental mutual telexistence systems in 2004 [3]. In 2005, a mutual telexistence master-slave system called TELESAR II was constructed for the Aichi World Exposition.

TELESAR II is composed of three subsystems: a slave robot, a master cockpit, and a viewer system, as shown in Fig. 2. 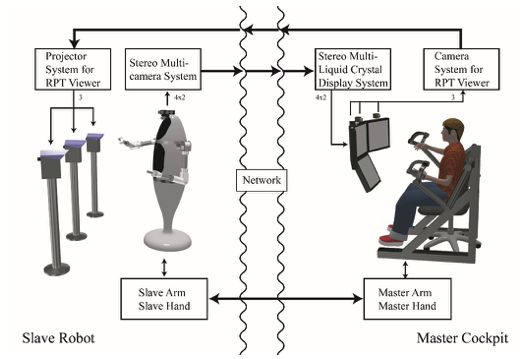 The robot has two human-sized arms and hands, a torso, and a head. Its neck has two degrees-of-freedom (DOFs), by which it can rotate around its pitch and roll axes. The robot has four pairs of stereo cameras located on top of its head for a three-dimensional surround display, so that an operator can see the remote environment naturally with a sensation of presence. A microphone array and a speaker are also employed for auditory sensation and verbal communication. Each arm has seven DOFs, and each hand has five fingers with a total of eight DOFs [4].

The cockpit consists of two master arms, two master hands, the aforementioned multi-stereo display system, speakers, a microphone, and cameras for capturing the images of the operator in real time. For the operator to move smoothly, each master arm has a six-DOF structure so that the operator's elbow is free of constraints. To control the redundant seven DOFs of the anthropomorphic slave arm, a small orientation sensor is mounted on the operator's elbow. Therefore, each master arm can measure the seven-DOF motions of the corresponding slave arm, whereas the force from each slave arm is transmitted back to the corresponding master arm with six DOFs. 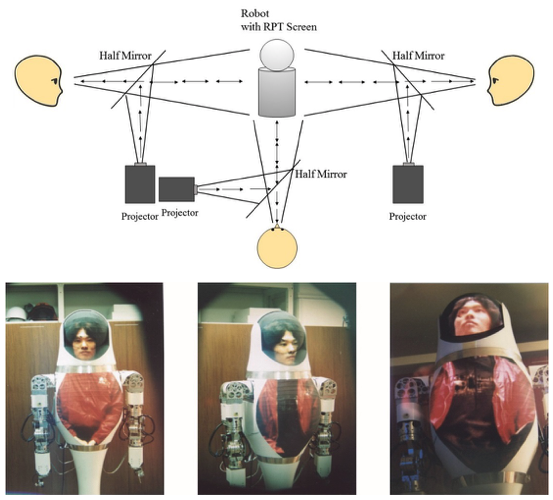 Figure 3 Principle of the Retroreflective Projection Technology (RPT) and multi-projection images from different angles at the same time.

Figure 4 (left view) illustrates the telexistence surrogate robot TELESAR II as a virtual exoskeleton human amplifier of a remote operator by showing his image as if he is inside the robot, and Fig. 4 (right view) shows the operator who is telexisting in the TELESAR II robot, feeling as if he were inside the robot. Nonverbal communication such as gestures and handshakes could be performed in addition to conventional verbal communication, because a master-slave manipulation robot was used as the surrogate for a human [5]. Moreover, a person who remotely visited the surrogate robot’s location could be seen naturally and simultaneously by several people standing around the surrogate robot, so that mutual telexistence is attained.

PDFs of the following papers are available at https://tachilab.org/publications/.