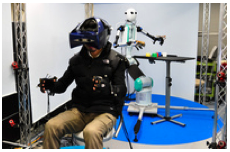 "TELESAR V" is a haptic telexistence system which enables a user to bind with a dexterous robot and experience what the robot feels from its fingertip when manipulating and touching objects remotely.

The user is able to see the remote environment and the robot hands as if he were inside the robot and hear what the robot hears in the remote location through a Head Mounted Display. With human-like movements of the upper body, arms and hands of TELESAR V, together with the ability to see, hear and feel haptic sensation simultaneously, the user experiences the out-of-body illusion when he observes himself using this system.

TELESAR V is a telexistence master–slave robot system that was developed to realize the concept of haptic telexistence. TELESAR V was designed and implemented with the development of a robot with high-speed, robust and full upper body, mechanically unconstrained master cockpit, and a 53-DOF anthropomorphic slave robot. The system provides an experience of our extended “body schema,” which allows a human to maintain an up-to-date representation of the positions of his or her various body parts in space. Body schema can be used to understand the posture of the remote body and to perform actions with the perception that the remote body is the user’s own body. With this experience, users can perform tasks dexterously and perceive the robot’s body as their own body through visual, auditory, and haptic sensations, which provide the simplest and fundamental experience of telexistence. TELESAR V master–slave system can transmit fine haptic sensations such as the texture and temperature of a material from an avatar robot’s fingers to a human user’s fingers.

As shown in Figs. 1 and 2, TELESAR V system consists of a master (local) and a slave (remote). The 53-DOF dexterous robot was developed with a 6-DOF torso, a 3-DOF head, 7-DOF arms, and 15-DOF hands. The robot has Full HD (1920 × 1080 pixels) cameras also for capturing wide-angle stereovision, and stereo microphones are situated on the robot’s ears for capturing audio signals from the remote site. The operator’s voice is transferred to the remote site and output through a small speaker installed near the robot’s mouth area for conventional verbal bidirectional communication. On the master side, the operator’s movements are captured with a motion-capturing system (OptiTrack). Finger bending is captured with 14-DOF using modified 5DT Data Glove 14. 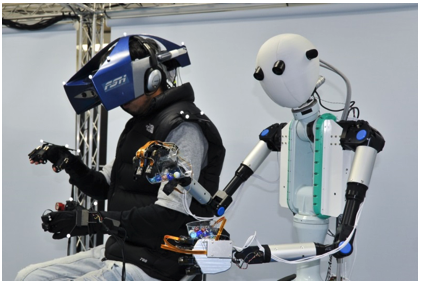 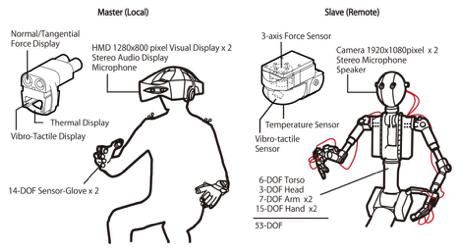 Figure 6 shows the left hand of TELESAR V robot with the haptic sensors, and the haptic displays set in the modified 5DT Data Glove 14. 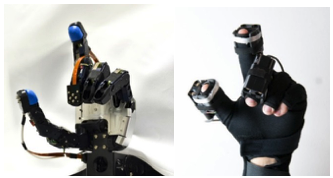 Figure 7 shows TELESAR V conducting several tasks such as picking up sticks, transferring small balls from one cup to another cup, producing Japanese calligraphy, playing Japanese chess (shogi), and feeling the texture of a cloth. 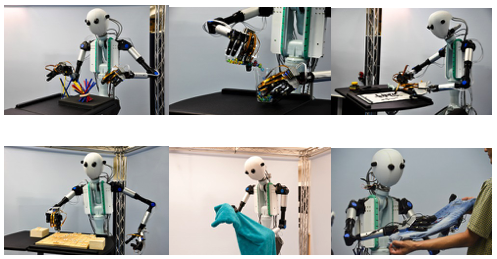