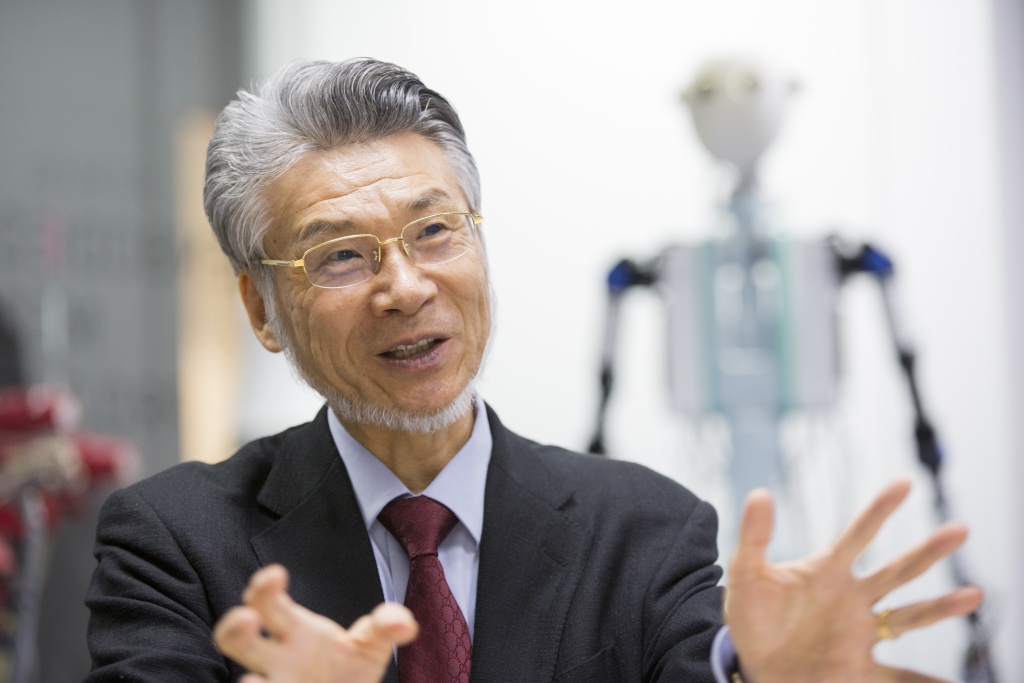 Professor Emeritus of The University of Tokyo
Founding President of the Virtual Reality Society of Japan
Founding Chairman of Telexistence Inc.

He joined the Faculty of Engineering of the University of Tokyo in1973, and in 1975, he moved to the Mechanical Engineering Laboratory, Ministry of International Trade and Industry, Tsukuba Science City, Japan, where he served as the Director of the Remote-Control Division and the Biorobotics Division. From 1979 to 1980, Dr. Tachi was a Japanese Government Award Senior Visiting Scientist at the Massachusetts Institute of Technology, Cambridge, USA. In 1989, he rejoined the University of Tokyo, and served as a Professor at the Department of Information Physics and Computing till March 2009. In April 2009, he moved to Keio University, where he served as a Professor of Graduate School of Media Design and the Director of the International Virtual Reality Center till March 2015.  From April 2015 to March 2020, he conducted the JST ACCEL "Embodied Media" research project at the Tachi Laboratory, Institute of Gerontology, The University of Tokyo, as Research Director. In January 2017, he founded and became Chairman of Telexistence, Inc. Prof. Tachi was conferred Professor Emeritus of The University of Tokyo in June 2009.

One of his early scientific achievements is the invention (1975) and development of an intelligent mobile robot system for the blind called Guide Dog Robot (1976-1983), which is the first of its kind. This system is known as MELDOG.

In 1980, Dr. Tachi invented the concept of telexistence, which enables a highly realistic sense of existence in a remote place without any actual travel, and has been working on the realization of telexistence since then.

Telexistence is a fundamental concept that refers to the general technology that allows a human being to have a real-time sensation of existing in a place other than where he/she actually exists and to interact with the remote environment, which may be real, virtual, or a combination of both. It also refers to an advanced type of teleoperation system that enables an operator at the controls to perform remote tasks dexterously with the feeling of existing in a surrogate robot working in a remote environment. Telexistence in the real environment through a virtual environment is also possible.

Telexistence became the fundamental guiding principle of the eight-year Japanese National Large-Scale Project, "Advanced Robot Technology in Hazardous Environments (1983-1990)." Through this project, he made theoretical considerations, established systematic design procedures, developed experimental hardware telexistence systems such as TELESAR, and demonstrated the feasibility of the concept.

His present research encompasses robotics, augmented reality, virtual reality, and haptics.  He developed a mutual telexistence system TELESAR II, which can generate the effect of a person in a remote place as directly appearing in local space using a combination of the alter-ego robot and retro-reflective projection technology (RPT). One of the applications of RPT is optical camouflage, which was chosen as one of the coolest inventions of 2003 by TIME Magazine. Another application of RPT, Transparent Cockpit, has been featured in IEEE Spectrum.

Autostereoscopy is also what he is pursuing. RePro3D is a full-parallax autostereoscopic 3D display with haptic feedback using RPT. It can produce 3D images superimposed on actual scenes with smooth motion parallax, which is suitable for interactive 3D applications. HaptoMIRAGE is another autostereoscopic display for seamless interaction with the real environment mixed together. This system can project the 3D image in mid-air with 180 degree-wide-angle of view based on our proposed ARIA (Active-shuttered Real Image Autostereoscopy) technology, and up to three users can observe the same image from different points of view. The 3D image can be superimposed on the real object, so that the user can get natural interaction with the mixed reality environment.

Dr. Tachi has also developed telexistence wide-angle immersive stereoscope (TWISTER), which has a full-color autostereoscopic display with a 360-degree field of view. TWISTER displays 3D images on LED panels rotating at a high speed, while simultaneously capturing a 3D image of the observer by employing cameras installed on the rotating panels. This technology will enable us to have a "meeting" in a virtual space with people who are physically in different places. TELESAR IV has been developed using TWISTER as its control cockpit.

Furthermore, Prof. Tachi is aiming at developing a system which enables recording, communicating, and reconstructing haptic sense. Haptic sense is required in addition to the visual and auditory senses in order to recreate realistic sensations. He is pursuing haptics using Haptic Primary Color Principle, and has developed a distributed vector-type sensor, called GelForce and an encounter-type proprioception display dubbed AED (Active Environment Display). He is also aiming to realize Haptic Telexistence, which conveys fine tactile sensations, as well as Haptic Editor, which creates new tactile sensations as we wish. In addition, he and his team have also developed the TECHTILE toolkit, GravityGrabber, GhostGlove, Pen de Touch, Pen de Draw, Colorful Touch Palette, and ARForce.

TELESAR V has been developed to research Haptic Telexistence. It has been successfully demonstrated that the TELESAR V master-slave system can transmit fine haptic sensations, such as the texture and temperature of material, from an avatar robot’s fingers to the human user’s fingers. The avatar robot is a telexistence anthropomorphic robot with a 53-degree-of-freedom body and limbs. It is able to transmit not only visual and auditory sensations but also haptic sensation with sensations of presence.

In October 2016, Prof. Tachi and his team were invited to participate in a competition organized by the Xprize Foundation to select the next theme for the International Prize-Race, in which they demonstrated TELESAR V to show its potential for the future. As a result, Avatar Xprize, based on telexistence technology, was selected as the theme for the 2018 Xprize. This has elevated the development of telexistence technology to a global trend.

In addition, he founded Telexistence inc. in 2017, a start-up from ACCEL Embodied Media Project, to accelerate the bridge to social implementation.

Recently, in 2019, he completed the TELESAR VI, which enables telexistence by controlling 67 degrees of freedom of the avatar robot through the transmission of a realistic sense of touch based on the "haptic primary color principle" in addition to audiovisual perception and the unconstrained measurement of 134 degrees of freedom of humans.

He initiated and founded ICAT (International Conference on Artificial Reality and Telexistence) in 1991 and IVRC (International-collegiate Virtual Reality Contest) in 1993. He was a member of IEEE VR Steering Committee from 1998 to 2017, and served as General Chair of IEEE VR 2001, 2002 and 2015.